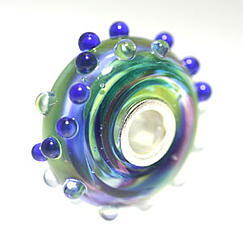 Yesterday I made our newest category on Trollbeads Gallery go live...and within half an hour 14 Trollbeads had been sold!  With no notice my very quick customers caught on and took advantage of a new product category created JUST for Trollbeads collectors who can only shop via the internet.

"Trollbeads:With a Twist" is the name of the new category and that is exactly what it is.  They are standard glass Trollbeads that have some noticeable difference from the bead it is supposed to be. From color, design and size! The really big versions or small versions of the standard Groups 1,2 and 3 will also be included in this new category. Have you seen those great Azure Bubbles with green streaks or the Blue Deserts that are red or even yellow? The Trollbead to the left is a striking rendition of the new White Cap Trollbead. How about the Khaki Stripes with Pink in the khaki area?  I know for a fact that many collectors who are close to Trollbeads stores love to collect these beads and go around hunting for them. Notice the pink in the Khaki Stripes below! 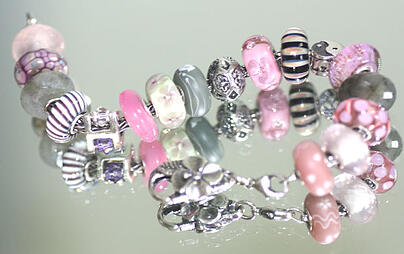 Whatever the bead is the price is it's original retail price. Also shown here will be the precious stone beads that are very light compared to the standard stone bead or very dark.  The extremes of the stone beads makes them beautiful when used all together.  The dark Aventurine looks like deep emerald.

Another precious stone Trollbeads to keep your eyes out for is the very light Golden Quartz.  It looks like a yellow sapphire! The one below is a beauty but they 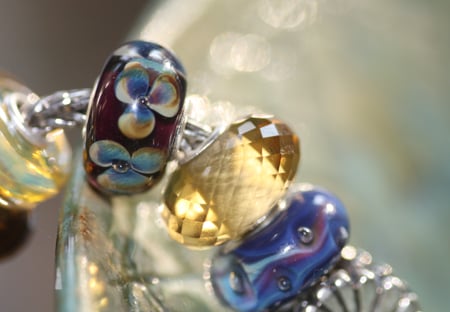 come in even lighter than this one!

The beads like Azure Bubbles (above) are good to buy from this category because where they are all so different at least you can choose the one you want. Do you like it with brown? With Pink? With light green? The Blue Desert (below) is certainly a beautiful bead but it definitely is not blue!  I will be posting more and more beads here so stay tuned! 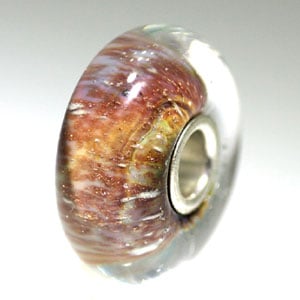 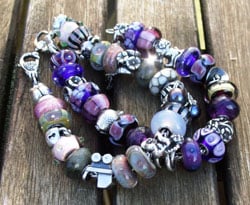 Our guest blogger has once again written a personal and engaging article about her Trollbeads. Anna Teresa is from the Netherlands and is an active member of Trollbeads Gallery Forum.

We are thrilled to hear more from her!

Making bracelets that go with my mood and outfit, that is what I do. There are combinations that I have worn only once or twice in the almost two years that I collect Trollbeads. And the thought of having a bracelet that I would not take apart anymore didn’t cross my mind.
Although I have seen many beautiful bracelets from other collector that were gorgeous and meant to stay the way they were. Sometimes with a greyhound lock, so that they could not be taken apart anymore.
But when I got more and more beads and I had more than one bracelet I thought it would be easy to have a lovely ‘permanent’ bracelet with a serene, classy look that I could were every day. So when I was in a hurry in the morning I just had to grab that one and I would be looking great. 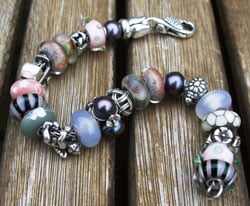 And so I made one as pretty as I could and it stayed that way a few weeks. Because permanent is not really permanent for me. So now and then I just have to change a bead or two. Not that I am not satisfied with the combination at the time, but because I buy a great other bead or because the time of the year changes. In the winter I tend to wear other colors than in spring or summer.
And so it happened that my ‘classy’ bracelet which I started in oktober 2010 has had a few different looks until now. The base is the same every time. Deep bubbles, khaki stripe, pink desert and retired Julian. But the other beads can vary: labradorite, peacock pearls, kimono and today I put  gemstones on it. 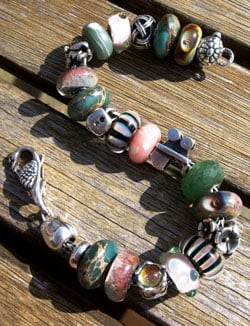 The past month there were a few other combinations that I didn’t take apart anymore. For practical reasons. But I discovered that being practical kills my creativity. Because I didn’t make new combinations anymore. Keeping a particular bead in a combination means that I cannot use it for something else.
So last night I did something liberating. I took all the beads of my bracelets (three silver and two leather) and my two necklaces and put them in my boxes. Then I sat down on the couch and as a kid in the candy store I just started from scratch making new combinations. That was so much fun that I decided that I do that much more often. In an hour I had made about five new combinations and realized I don’t need new beads every week to make something new. I just need to start everyday with a fresh start.

My love for Trollbeads is everlasting, but my tenability of my bracelets is not!

Ps. Don’t want to forget which combinations you made? Take pictures!!

For a clear and easy lesson on how to photograph your Trollbeads go to Trollbeads Gallery Forum "Groups" and join the Photography group. 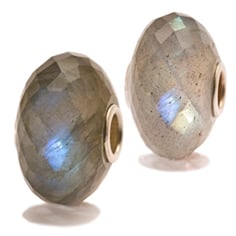 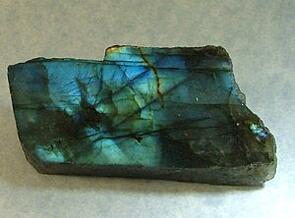 In 2008 Trollbeads introduced the first release of Precious Stone Beads.   It was the beginning of what would become a very strong category for Trollbeads.   Designed by Lise Aagaard, they are faceted beads made entirely of stone with the standard Trollbeads silver core.  The stone beads are roughly 13 mm x 6 mm which makes them wider than the glass Trollbeads and taller than the Prism glass Trollbeads.   Each facet is cut into the raw stone as a diamond cutter would cut a diamond and for this reason the Precious Stone beads create a totally new reflection for your Trollbead jewelry.  The Prism beads have facets but Prisms are glass beads created in a mold so the facets have softer edges and aren’t as sharp and reflective as the facets in the stone beads.

One of my favorites is the Labradorite Precious Stone Bead.  Although the color of the stone is gray with streaks of black veining, the stone displays an array of colors according to the angle of light refraction.  This is what makes this one stone so much more fascinating to people.  The arrays of colors that “flash” within the stone can be greens, blues, pinks and yellows. The flash is referred to as “Labradorescence”.  Troll collectors are always on the hunt for the flash colors that go with a particular color theme Trollbead bracelet but they end up being more and more charmed by the unpredictability of the flashes and the color ends up not mattering as much.  Each stone seems to speak to the person selecting it.

Labradorite, sometimes referred to as spectrolyte, is a mineral that belongs to the plagioclase feldspar group. The chemical elements are a combination of sodium, calcium, silicone and aluminum. This mineral distinguishes itself through its mysterious and captivating iridescent glow and each Labradorite Trollbead will have it.  I have personally seen all four color families as mentioned above, but I have also seen the exterior of the stone come in light grays to very dark grays.   On the Mohrs Scale, which ranks the hardness of stones on a scale from 1 to 10 with 10 being the diamond, Labradorite is a 6.5.  Labradorite ranks at the top of the semi-precious stones in both brilliance and hardness.

I have enjoyed researching the various stones and discovering the different meanings each stone has.  There is so much legend and lore to stones and I can see why Trollbeads has chosen to add stones to the line as so many of the Troll beads are developed from lore and legends.  For many centuries, the occult used labradorite to relieve conditions such as headaches, depression and anxiety. The curative powers of labradorite heal illnesses associated with the eyes, brain and the intestinal tract.   In today’s world Labradorite is considered a “power” stone.  Having the stone will allow you to see through layers and illusions to determine what your actual dreams are.  It is also believed that labradorite will strengthen your intuitive powers, stimulate your imagination and creativity and also help you to develop new ideas through deeper interest and enthusiasm.  As a talisman Labradorite helps you see more clearly, without distractions, in meditation.  Do you have your Labradorite Trollbead yet? Trollbeads Gallery is happy to hunt for the best Labradorite bead for you and will send photographs if needed.

From the Trollbeads Description: This stone is also known as the transformation stone, or star stone. It is said to contain dust from the stars and the bluish-green iridescent light that shines from its heart, is the light from a star fog embedded there by alien creatures from strange worlds. It gives strength and constitution.