How I Became a COT Case Compulsive Obsessive Troll-aholic

Suzanne Hopping (in below photo)

It all started in 2003 when the publishing company I worked for as an Art Director, moved premises from a beautiful, renovated, old wharf jutting over Sydney Harbour, to new premises on the north side of the Sydney Harbour Bridge.

My work colleagues and I were very unhappy with the move as we had lost our stunning views, and amazing location on the water (even though the area we had moved to was very close to the harbour and full of lovely cafes and gorgeous little shops) and although it was still in Sydney it had the look and atmosphere of a quaint village.

While exploring my new surroundings I came across a wonderful little art, craft and gift shop, which sold beads. They had a large display of Pandora, which my workmates were getting into in a big way.

The owner of the shop, Penny offered me a gold Pandora bracelet full of gold charms, which a lady was selling, because she needed the money. I ended up buying it at a very reasonable price. I then noticed there was an amazing bead on this bracelet, which was unlike any of the other Pandora beads. I was told by Penny that it was called a Trollbead (the bracelet owner had it specially fitted onto the Pandora bracelet). It was truly the most magnificent bead I had ever seen! She then told me it was a Trollbead known as the Gold Wisdom! I felt so privileged to have this beauty in the centre of the gold Pandora bracelet I had just purchased!

Of course, I then had to find out more about the origins of this wonderful bead. I was very lucky, as, in the corner of the shop, was a small display of beads, which had been over-shadowed by the Pandora display. Penny told me they were ‘Trollbeads’ and the Gold Wisdom belonged to this family. I was totally gob-smacked by their originality and beauty. They were truly exquisite little works of art, a far cry from the production-line Pandoras, which as far as I was concerned faded into insignificance next to Trollbeads.

I was immediately hooked and started buying these little gems like there was no tomorrow!

In my obsession I fell in love with the translucent and crystal like properties of the Dichroic Ice beads and ended up with twenty-four of them! Yes, you read correctly, TWENTY-FOUR!

I bought every variety of the silver with precious stones. I was also fortunate enough to buy many beads that are now retired – such as the Tibet Tibet, the Purple Bud and many, many more. My only regret is that I wish I knew then, what I know now about Trollbeads, I could have had even more of the older retireds, which now grace both Louise’s museum and the official Trollbead’s museum.

Over the years my Trollbead obsession grew stronger and I ended up with a wonderful book about the history of Trollbeads, which I refer to regularly.

The Gold Wisdom no longer lives on my Pandora bracelet but has pride of place on my Amethyst World Tour Fantasy Necklace.

In 2009 I ended up winning the People’s Bead competition.

But that’s another story … 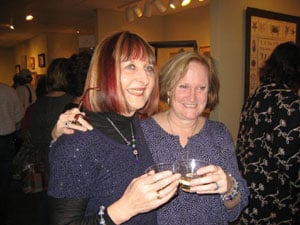 In the photo above Suzanne Hopping and Louise Rogers enjoy the opening night at Trollbeads Fest! 2010.